I am here at a Bord Bia seminar for food producers and will be blogging from it for the next couple of hours.

Willie’s business (their website here – needs a rework!) started in 2007 with a team of four and they currently employ 10. 4 of those are food technologists. They manufacture sports nutrition products. and had 50% sales growth in 2010 – driven by export sales (73% of turnover). They export to 12 different countries. 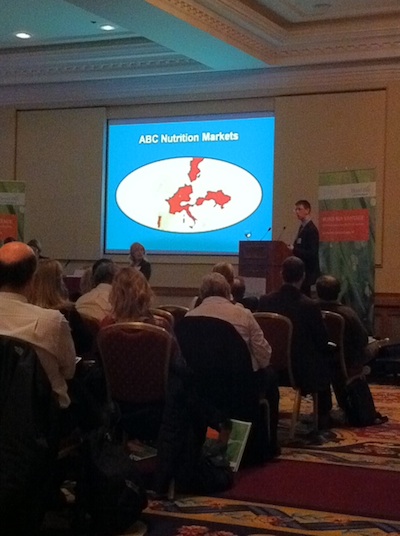 How did they grow their business?

In Spain they work with someone they initially met at a trade show and then spent 1.5 years sending him samples. Now he is one of their biggest customers. For Greece he scoured forums (using google translate) and identified targets that way.
Italy happened via a cold call from someone who visited their website. Which was terrible at the time. The Italian found them listed as exhibitors at a relevant trade show and this happened with another customer as well.

Sweden happened differently – they met a consultant who had done a report on the market there who discounted their chances in a saturated and competitive market.
They got into it via a Swedish company who were used as a trade reference by a prospective Chinese supplier. They chased them down like a dog with a bone. (this guy is incredibly tenacious, really impressive!).

Had great words for both Bord Bia and Enterprise Ireland because of their local knowledge in overseas markets. He also mentioned the importance of showcasing – working with leading names in whatever sector you are in. On a related theme if you win an award put it on your packaging – use stickers if you have too until you can get the packaging redesigned.

75% of their ingredients are dairy based – purchasing from suppliers like Carbery in Cork. He used this to illustrate how a successful food business leads to significant employment downstream (as opposed to software for example). Was full of praise for the quality of Irish dairy products – the grass based system we have gives us an edge over most other countries. A lot of countries do not have access to the raw materials and they are an ambient export so easy to ship.

He spoke a little about their team and the ongoing investment in their qualifications and scientific knowledge. They assists them with their ongoing R&D – investigating the stress on sportsmen and women across different sports.

Attending trade shows – both the ones in Ireland for incoming buyers which are run by Bord Bia and also Trade Shows in other countries. On the internet get your site up and then ensure you are listed in those trade show websites – they lead to very targeted traffic. A great fan of working late in the night on the web – people are up still and on forums etc.