Brand consistency across products and ranges

This is a tricky post for a non-designer to write because I do not have the training nor the vocabulary to express some of my thoughts in this area.

However it is an area of great concern for artisan and local foods brands as they start to expand. The voice of the brand needs to be consistent across channels and when expressed by different people and on the shelf-edge products across different categories need to be readily identifible.

Speaking as a consumer (the hat I wear most easily) I need food brands to help me. While I spend more time than the average person when shopping for food I can still be in a hurry at times. And given that time pressure I need to very quickly be able to visually identify my favorite brands on the shelf-edge almost sub-consciously.

What makes that difficult to achieve?

Lots of stuff. A small brand’s products being scattered across categories (unlike some bigger brands who get to impose merchandising standards and some cohesion in display because of their leverage) and inconsistency of placing in different shops and stores.

And then there is bad design – for example subtle visual aids which work for a designer on their computer but which cannot be picked up in a quick scan in-store.

The following 9 slides were presented by founder Breda Maher at a recent Bord Bia event in Cashel which I was on the panel for. That link brings you to a page where you can see more details and download the other presentations which were really good. This was the stated objective of the work:

Some background on Breda’s presentation from my notes:
The redesign was prompted by feedback from a new and potentially big continental customer who said that the products were superb but that the branding was a disaster.

Breda used a mentor from Bord Bia and complemented that with their Foresight4food research service. The design work was done by Dynamo and research methods used included focus groups, accompanied trips and online focus groups.

Really interesting point for me which Breda shared quite openly was that Breda had to pause the project for her to catch up with the brand ideas which were being presented. After that pause of 8 weeks, during which time she gave herself the space to rejig her head around the new visual presentation of the brand, she restarted the process and was able to fully commit to it.

To ensure the rebrand did not harm sales a marketing plan was developed because of the dramatic changes to the brand – both in terms of perception and also actual issues around being found on the shelf.

The rebrand has been a tremendous success and was complimented from the floor afterwards.

In contrast, a brand which challenged me on the shelf-edge

This is tricky to write because it challenges an Irish brand’s design but made easier by the fact that the brand concerned (Lakeshore) was a great artisan brand but has since been sucked into the Boyne Valley Group.

This was prompted by a shopping session in my local Supervalu where I noticed that the Lakeshore brand was represented in a number of categories on a single isle – but that I could not spot the brand products in each category without working really hard at it.

So I took some photos to flesh out a future post (this one) and when I looked back at them discovered something interesting. I was apparently wrong… 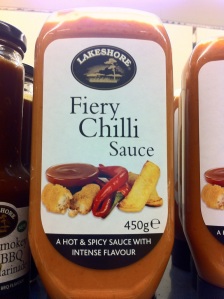 Absolute consistency. Logo, font, photography. All perfect with the benefit of hindsight, big photos and time to review them in detail.

Yet I know that I did have issues in the store. And so got to thinking about an area I know a little more about. The design of websites where individual logical elements work on the web designers screen yet when presented en-mass to end users the overall site doesn’t.

And that is what (I think) is happening here. The logo is consistent – but it is white and gold on a black background, it is small in scale and the graphic is almost invisible on a quick look. So in the absence of a clearly distinguishing logo to anchor my shelf-scanning I am left with consistent font and photography which is very professional but the combination is probably  too bland on the white background.

That’s it – a long post and unhappy that I cannot pin that last piece down. I just don’t know if the issue I identified for me with Lakeshore is shared by others and also don’t know if my observations are actually valid.